The Inverness Burgh Directory (also referred to as the Country Directory) and other parish related materials, offers us a wonderful record of the team at Millburn and ownership. These records are available online, but for someone to go through all the years is a thankless task.

So, it had to be me and I'm very pleased with the results.

The main directory started publication in 1890s, and continued for several decades, but other materials exist prior to this and the prior editions seems more sporadic than annual. I've scanned these for insight into the employees, management and other references to Millburn distillery.

This early incarnation is of particular interest, as it confirms there is no Millburn distillery in operation, and this confirms what we expected. The distillery site during this period was being utilised as a flour mill. Even this seems lowkey as the only flour related entry under Millburn itself is for a Lewis Davidson.

The Millburn section is fairly scant, underlining how rural it was during this period, which is backed up by our map section.

This entry confirms George Rose as the owner of the distillery and the value/rental is £250.

A John Farquharson is noted to be the distillery manager.

We also have confirmation that George Rose is the current owner and paying £250 in rent or yearly value.

John remains in his role and we must presume is doing a sterling job.

The annual rent or value offers us an interesting insight, as it lists the distillery and warehouses on an individual basis... and the owners should be Haig and not Hig.

The Haig's are listed as the current owners, as expected.

A very scant offering with only 1 entry relating to the distillery.

This entry in the Inverness Burgh Directory confirms the exciseman linked to Millburn, but also that each of the 3 distilleries had their own exclusive representative who would have been on site recording all manner of detail.

Confirmation that William Grigor was the distillery manager.

We also have the head maltsman, an important role during this period when everything was done on site. 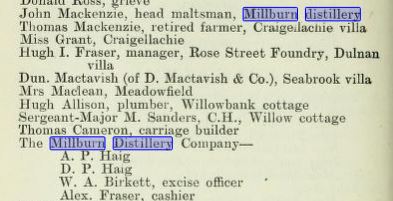 All three distilleries are correctly listed in the Distillers section of the publication, despite this being a rather turbulent period for whisky in Scotland.

A year on and this entry confirms there's no change amongst the excisemen serving the Inverness distilleries, along with the owners and manager.

William remains as distillery manager for Millburn, there tends to be a longevity to those that reach this position in distilling during this era. Where else is there to go? Very few managers are able to make that leap to becoming a co-owner as John Birnie did with Glen Mhor.

A short and sweet entry confirming the main ownership elements at the distillery.

Pretty much no change on the distillery entry, with only a new cashier noted.

And the name remains as Millburn, with the 2 other Inverness distilleries due to stop distilling while the US Navy uses their combined site.

This volume of the Inverness Burgh Directory, confirms that William Grigor remained as the distillery manager, although many of the staff named in previous editions were no longer on record. Diriebught Road still exists, and is the road that ventures down past the distillery site from the hillside. Also, we have several potential distillery workers within the same entry, suggesting that whole team is recorded. 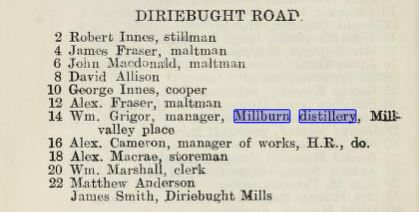 This entry from the same year, provides insight into the ownership, cashier and also the exciseman (a constant presence during this era) was a J. Davis.

And as expected, Millburn is listed under the Distillers section of the publication. Glen Albyn is missing as it is currently being used by the US Navy as a military base - the same fate that befell Glen Mhor, although it does appear in the listing.

This is an important year as it marks the last full year under the Haig's Millburn Distillery Company Limited. We know that under the new ownership the distillery changed name and potentially there were other internal changes, including staff.

An initial thought was that J.A. Grant was brought in under the new ownership, but that's not the case as William is no longer in his position (for unknown reasons) and we have a new individual with a very famous whisky surname. That is until you see how many Grant's are listed in the directory, giving some weight to the possibility that Grant is the Scottish version of Smith.
More research might confirm the fate of Grigor, who potentially may have just passed away as we've seen with Robert Robertson at Glen Mhor. A distillery manager was top of the tree (excluding ownership) in an era were there weren't the variety of roles and ambassador opportunities we see today.

Otherwise the distillery team seems intact, with presumably David not wanting to say what his role was!

Confirms the name change as a new regime takes control of the distillery and underlines the fact that the Inverness Directory was updated annually.

The distillery team are also captured in this edition:

David remains shy, but it seems despite new owners, they left the team intact other than the name of the site. The name change is also updated in the Distillers section, which also reflects another acquisition, as Mackinlay & Birnie purchased the Glenalbyn distillery.

Is very much as you were, with the new name continuing and the team remaining present. The hugely damaging fire was in 1922, so we'll look to future years with interest.

More of the same with the distillery team continuing as per previous years with one notable change in the maltman team - Alex is no longer listed and we have a William, who all confusingly have the same surname. 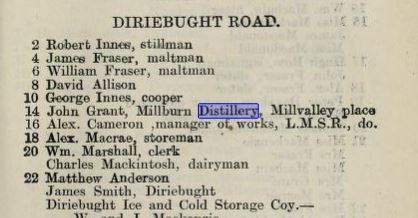 A year without mentioning the distillery team, perhaps the refurbishment from the fire was taking longer than expected? However, J.A. Grant remains in the central role:

This entry confirms that John A. Grant is the current distillery manager and resides at Dulnan Villa on Millburn Road - an address that seems to be consistently occupied the manager of the distillery. Confirming that this villa was intended for that purpose and also belonged to the site.

And the Distillers section shows that Millburn is more referred to as Booth's Distillery (not as catchy) and that the ownership of Glen Albyn has moved to Mackinlay & Birnie.

This year it notable for highlighting that a K. Grant from the distillery was a member of the Inverness Chamber of Commerce. Continuing the strong associations that these Inverness distilleries had with the community and local powers.

We can track him even further, with Kenneth Grant (distillery manager) living at Dulnan Villa on... Millburn Road. This building still exists.

In this publication, the distillery is referred to as being Booth's which acknowledges the owners. Technically, DCL had purchased the company just a couple of years prior.

Kenneth Grant is listed as the manager and we also have the suggestion that K. MacDonald is listed as the distillery fireman - seems unlikely someone living on Millburn Road, would be a fireman for Glen Albyn or Glen Mhor, which were on the other site of the city.
Distilleries and fire were a common risk, so it makes sense that someone was employed to prevent such an event. Especially as Millburn was partially destroyed by fire in 1922.

And the distillery is referred to as Booth's. 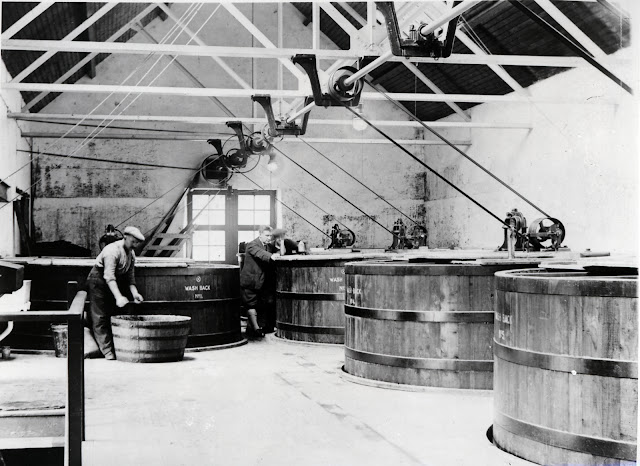 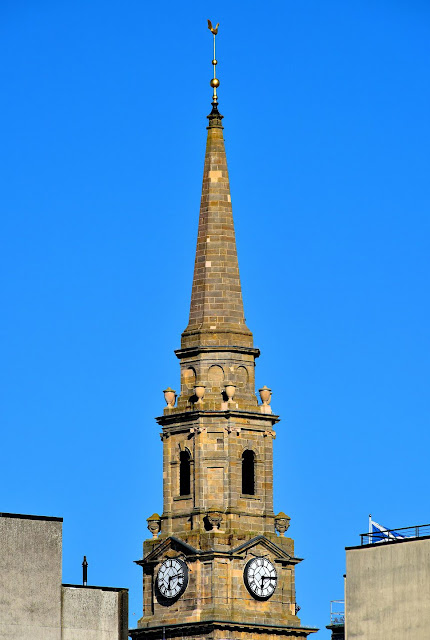